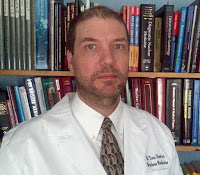 Your good health is my top priority. As a practicing physician, my goal is to prevent and cure disease whenever possible, to help the sick, and to give comfort at the end of life. My advice to everyone is to follow the ABC's of good health throughout your entire life. This means that I recommed that you:

As always, I'm Dedicated to Your Good Health!

Tom was born at Sacred Heart Medical Center in Spokane, Washington. Growing up in Spokane, his major interests at the time in addition to school were related to music. He attended the Tanglewood Summer program run by the brass section of the Boston Symphony Orchestra, played in jazz and concert school bands, and was 1st chair (trumpet) in the Spokane city wide Youth Orchestra. He graduated from Lewis and Clark High School.

After high school, Heston moved to Seattle to study at the University of Washington where he majored in music theory and history, and got accepted into the music composition program. He initially debated which major he should pursue- music or mathematics. He ultimately decided upon music, but stayed true to his interest in mathematics by being in the first class of music students to study programming computer music, which involved programming with Fortran and C#. He joined the Beta Theta Pi fraternity, and worked there as a cook and treasurer. After a brief break to work on a boat in Alaska (the Billikin, which was featured on Deadliest Catch season 1), he graduated from the UW with a Bachelor of Arts degree in Music Theory and History in 1987. Overlapping with his graduate studies in nutrition and with medical school, he earned his Bachelor of Sciences degree in Liberal Arts from Regents College, University of the State of New York (now Excelsior University).

After a year of graduate studies in nutrition at the University of Washington, Heston began medical school in St. Louis at St. Louis University School of Medicine. His major influences during medical school were Dr. Lawrence Lewis, the director of the Emergency Department, and Dr. James Littlefied. Both were enthusiastic about the practice of medicine and the value of devoting their professional lives to the service of people in need of medical care. After graduating with his MD with Distinction in Research, Heston applied for a residency in family medicine, with the plan to return to the Spokane, Washington region to practice medicine.

Duke University accepted Heston into their family medicine residency program at Fayetteville, North Carolina. During his internship year, a close family member had a significant decline in health, prompting a return to the Northwest to finish residency training. This blessing allowed the family to be together for the final months of his life (Van Morrison). As a result, Heston finished his training in family medicine at the University of Washington (Vancouver) and in addition completed a nuclear medicine residency at Oregon Health Sciences University.

Heston then moved to Kellogg, Idaho, where he worked at the Mountain Health Care medical clinic and Shoshone Medical Center . This small, rural, remote town had a service area of about 15,000 people and only primary care physicians, nurse practitioners, and physician assistants. During his initial years in Kellogg, Heston practice the full range of rural family practice including obstetrics, emergency medicine, and geriatrics. During this time he earned a PhD in Behavioral Sciences and Biostatistics from an unaccredited institution, primarily for continuing medical education purposes. Although the degree remains unaccredited, the coursework was rigorous and particularly valuable in deepening his understanding of biostatistics. This knowledge was of particular importance given Heston's ongoing work as a reviewer for medical research journals.

After several years of dedicated family medicine practice, Heston started the first nuclear medicine program in Kellogg and satellite clinics at several surrounding communities. He also was the first physician to perform a PET scan in Idaho north of the Boise Metropolitan area, the first (or possibly one of the first) physicians in all of Idaho to be certified in Nuclear Cardiology, and in the first group of physicians in Idaho to be awarded Fellowship status by the American Society of Nuclear Cardiology. He performed the first F-18 fluoride bone scan in the entire Inland Empire region, which includes all of the Spokane metropolitan area. After this breakthrough, physicians throughout the region began using this advanced, important cancer diagnostic tool.

In 2008, Heston underwent additional fellowship training in PET/CT at Johns Hopkins Hospital where he studied under Drs. Richard Wahl, Frank Bengel, and Harvey Zeissman. During the 2008 to 2009 academic year, Heston lived in Owings Mills, and occasionally rode the same metro with Dr. Ben Carson.